In spring 1971, an aging Elizabeth Lord wrote about the Seal Rock Cottage in her garden journal:

“I had Ivan cut the alders – down the path way, that part has changed so much, a sweet little garden wild things growing along the wood edging – but 2 years and no attention became a mass of salal [Gaultheria shallon] & salmonberry [Rubus spectabilis] and no trace of a trail.  Kurt took out the wild planting of salal [Gaultheria shallon] where the honeysuckle [Lonicera] had entwined itself – this left a larger space I immediately filled with Marguerites and Digitalis. I shall keep it such in memory of Montague’s love of wild flowers. This was a trying year. I do not have the pep to do the heavy work about the place down here. Nature grows at its will and nothing can hold it back. “

Nature has been working on the Lord property at Seal Rock for a very long time. The constant moisture from the neighboring Pacific Ocean provides each plant with plenty of water. The coastal thickets of salal, salmonberry, and sword fern are dense underneath the canopy of spruce and shore pines. It defies imagination how the elk, such a large creature, can navigate these impenetrable seeming thickets with such ease. 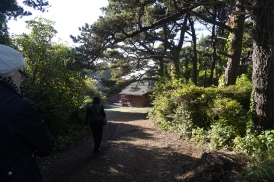 The cottage tucked in among the shore pines, salal and sword ferns. 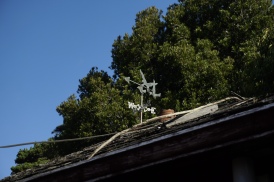 Swallows on the weather vane for the little cottage at Swallow Drive. 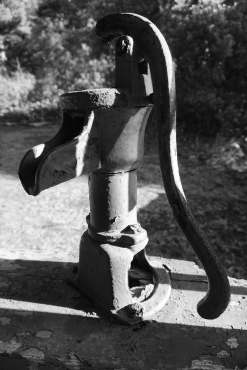 The hand pump for the well is still mounted and plumbed on the front porch though long ago the property had city water plumbed in. 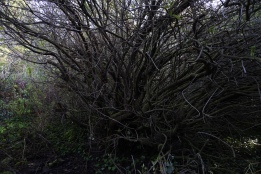 A custom made stained glass adorns the bathroom

The old ice box is still on the front porch next to the well pump, reminders of a time before electricity and modern amenities

It would be amazing to see the huge Rhododendrons in bloom.

The garden is a collection of massive century old Rhododendrons

The patina shows on the buildings dating back to the late 1800’s.

High enough to be out of the Tsunami zone and with views looking out onto the pacific ocean.

You can still see Barnacles on the rocks of the fireplace.

The Seal Rock Cottage and Garden was an often used getaway for Elizabeth and Edith, mentioned frequently in Elizabeth’s journals from the mid-1930’s to the 70’s. Reading through the journals, one sees their desire to escape the Willamette Valley’s summer heat to revel in the cooler coastal conditions where plants such as heather, rhododendron, calla lilies and coastal natives thrived during the dog days of summer.

Several of us were fortunate to visit the Seal Rock Cottage and Garden on a recent stellar winter day. Carmen Lord, Elizabeth’s relative and the property’s owner, has the site up for sale. The hope is that the property is not sold to a developer but instead to someone who appreciates the history that runs deep and who wants to preserve what can be saved.

“Staying the 2 weeks at Seal Rock knowing the wet weather in August was helping the garden here and as the year of ’68 was an off year and about finished as far as gardening was concerned. I was happy knowing that I did not have too much to do, but could plan now for the year to come.”